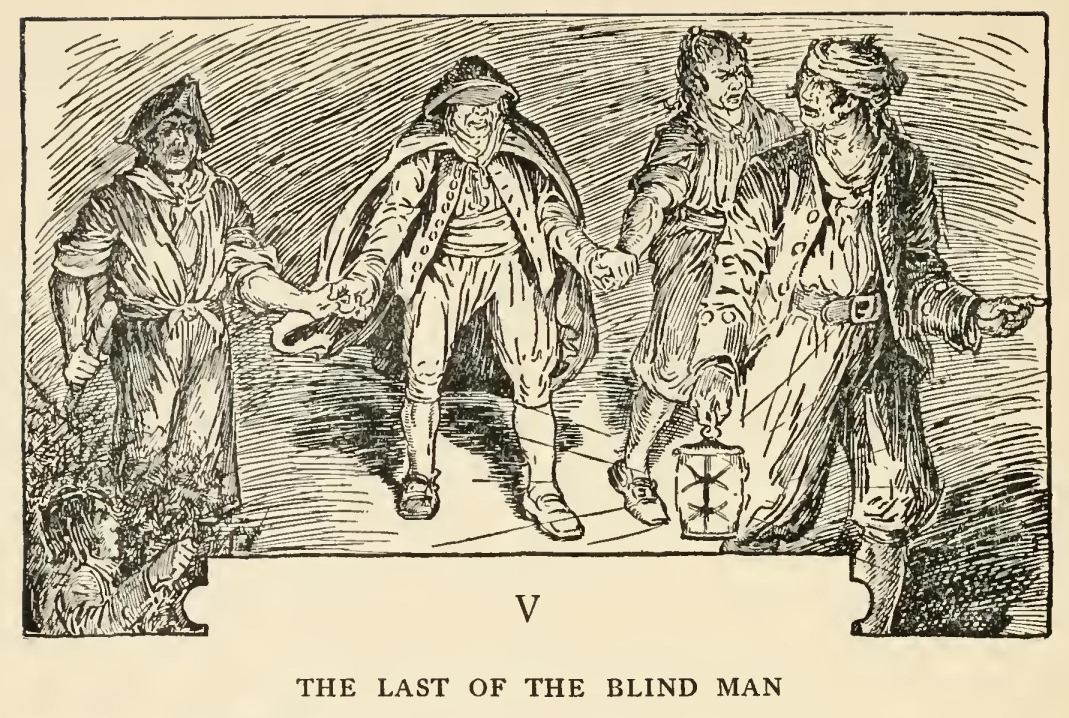 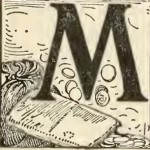 MY curiosity, in a sense, was stronger than my fear, for I could not remain where I was, but crept back to the bank again, whence, sheltering my head behind a bush of broom, I might command the road before our door. I was scarcely in position ere my enemies began to arrive, seven or eight of them, running hard, their feet beating out of time along the road and the man with the lantern some paces in front. Three men ran together, hand in hand; and I made out, even through the mist, that the middle man of this trio was the blind beggar. The next moment his voice showed me that I was right.

“Down with the door!” he cried.

“Aye, aye, sir!” answered two or three; and a rush was made upon the Admiral Benbow, the lantern-bearer following; and then I could see them pause, and hear speeches passed in a lower key, as if they were surprised to find the door open. But the pause was brief, for the blind man again issued his commands. His voice sounded louder and higher, as if he were afire with eagerness and rage.

“In, in, in!” he shouted, and cursed them for their delay.

Four or five of them obeyed at once, two remaining on the road with the formidable beggar. There was a pause, then a cry of surprise, and then a voice shouting from the house, “Bill’s dead.”

But the blind man swore at them again for their delay.

“Search him, some of you shirking lubbers, and the rest of you aloft and get the chest,” he cried.

I could hear their feet rattling up our old stairs, so that the house must have shook with it. Promptly afterwards, fresh sounds of astonishment arose; the window of the captain’s room was thrown open with a slam and a jingle of broken glass, and a man leaned out into the moonlight, head and shoulders, and addressed the blind beggar on the road below him.

“Pew,” he cried, “they’ve been before us. Someone’s turned the chest out alow and aloft.”

The blind man cursed the money.

“We don’t see it here nohow,” returned the man.

“Here, you below there, is it on Bill?” cried the blind man again.

At that another fellow, probably him who had remained below to search the captain’s body, came to the door of the inn. “Bill’s been overhauled a’ready,” said he; “nothin’ left.”

“It’s these people of the inn—it’s that boy. I wish I had put his eyes out!” cried the blind man, Pew. “There were no time ago—they had the door bolted when I tried it. Scatter, lads, and find ’em.”

“Sure enough, they left their glim here,” said the fellow from the window.

“Scatter and find ’em! Rout the house out!” reiterated Pew, striking with his stick upon the road.

Then there followed a great to-do through all our old inn, heavy feet pounding to and fro, furniture thrown over, doors kicked in, until the very rocks re-echoed and the men came out again, one after another, on the road and declared that we were nowhere to be found. And just the same whistle that had alarmed my mother and myself over the dead captain’s money was once more clearly audible through the night, but this time twice repeated. I had thought it to be the blind man’s trumpet, so to speak, summoning his crew to the assault, but I now found that it was a signal from the hillside towards the hamlet, and from its effect upon the buccaneers, a signal to warn them of approaching danger.

“Budge, you skulk!” cried Pew. “Dirk was a fool and a coward from the first—you wouldn’t mind him. They must be close by; they can’t be far; you have your hands on it. Scatter and look for them, dogs! Oh, shiver my soul,” he cried, “if I had eyes!”

This appeal seemed to produce some effect, for two of the fellows began to look here and there among the lumber, but half-heartedly, I thought, and with half an eye to their own danger all the time, while the rest stood irresolute on the road.

“You have your hands on thousands, you fools, and you hang a leg! You’d be as rich as kings if you could find it, and you know it’s here, and you stand there skulking. There wasn’t one of you dared face Bill, and I did it—a blind man! And I’m to lose my chance for you! I’m to be a poor, crawling beggar, sponging for rum, when I might be rolling in a coach! If you had the pluck of a weevil in a biscuit you would catch them still.”

“Hang it, Pew, we’ve got the doubloons!” grumbled one.

“They might have hid the blessed thing,” said another. “Take the Georges, Pew, and don’t stand here squalling.”

Squalling was the word for it; Pew’s anger rose so high at these objections till at last, his passion completely taking the upper hand, he struck at them right and left in his blindness and his stick sounded heavily on more than one. 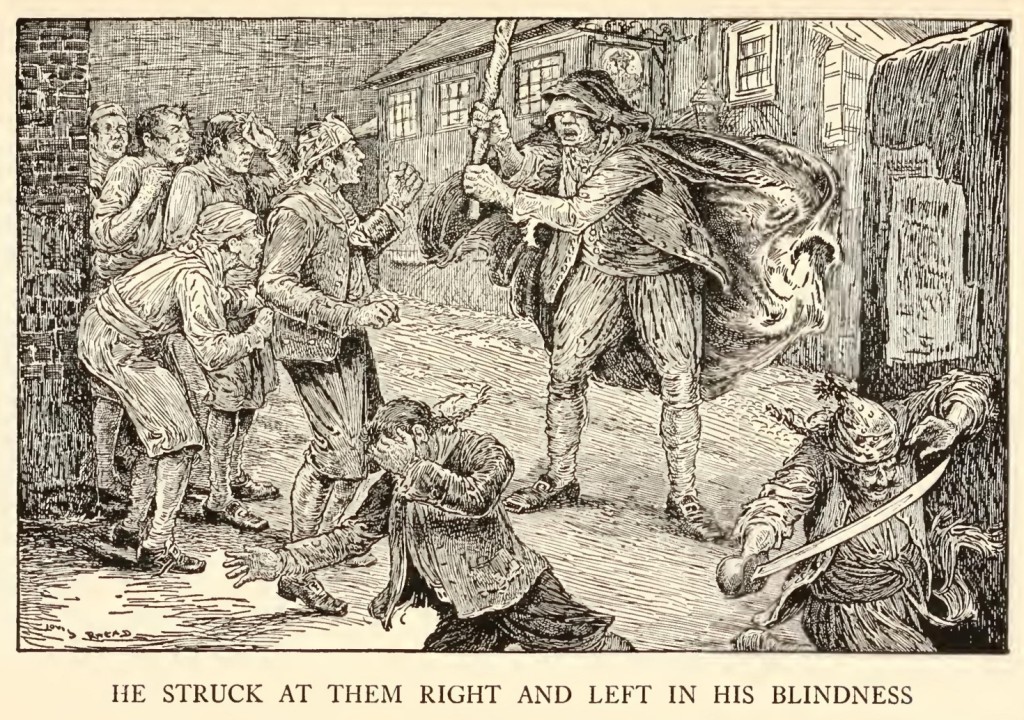 These, in their turn, cursed back at the blind miscreant, threatened him in horrid terms, and tried in vain to catch the stick and wrest it from his grasp.

This quarrel was the saving of us, for while it was still raging, another sound came from the top of the hill on the side of the hamlet—the tramp of horses galloping. Almost at the same time a pistol-shot, flash and report, came from the hedge side. And that was plainly the last signal of danger, for the buccaneers turned at once and ran, separating in every direction, one seaward along the cove, one slant across the hill, and so on, so that in half a minute not a sign of them remained but Pew. Him they had deserted, whether in sheer panic or out of revenge for his ill words and blows I know not; but there he remained behind, tapping up and down the road in a frenzy, and groping and calling for his comrades. Finally he took a wrong turn and ran a few steps past me, towards the hamlet, crying, “Johnny, Black Dog, Dirk,” and other names, “you won’t leave old Pew, mates—not old Pew!”

Just then the noise of horses topped the rise, and four or five riders came in sight in the moonlight and swept at full gallop down the slope.

At this Pew saw his error, turned with a scream, and ran straight for the ditch, into which he rolled. But he was on his feet again in a second and made another dash, now utterly bewildered, right under the nearest of the coming horses.

The rider tried to save him, but in vain. Down went Pew with a cry that rang high into the night; and the four hoofs trampled and spurned him and passed by. He fell on his side, then gently collapsed upon his face and moved no more.

I leaped to my feet and hailed the riders. They were pulling up, at any rate, horrified at the accident; and I soon saw what they were. One, tailing out behind the rest, was a lad that had gone from the hamlet to Dr. Livesey’s; the rest were revenue officers, whom he had met by the way, and with whom he had had the intelligence to return at once. Some news of the lugger in Kitt’s Hole had found its way to Supervisor Dance and set him forth that night in our direction, and to that circumstance my mother and I owed our preservation from death.

Pew was dead, stone dead. As for my mother, when we had carried her up to the hamlet, a little cold water and salts and that soon brought her back again, and she was none the worse for her terror, though she still continued to deplore the balance of the money. In the meantime the supervisor rode on, as fast as he could, to Kitt’s Hole; but his men had to dismount and grope down the dingle, leading, and sometimes supporting, their horses, and in continual fear of ambushes; so it was no great matter for surprise that when they got down to the Hole the lugger was already under way, though still close in. He hailed her. A voice replied, telling him to keep out of the moonlight or he would get some lead in him, and at the same time a bullet whistled close by his arm. Soon after, the lugger doubled the point and disappeared. Mr. Dance stood there, as he said, “like a fish out of water,” and all he could do was to dispatch a man to B—— to warn the cutter. “And that,” said he, “is just about as good as nothing. They’ve got off clean, and there’s an end. Only,” he added, “I’m glad I trod on Master Pew’s corns,” for by this time he had heard my story.

I went back with him to the Admiral Benbow, and you cannot imagine a house in such a state of smash; the very clock had been thrown down by these fellows in their furious hunt after my mother and myself; and though nothing had actually been taken away except the captain’s money-bag and a little silver from the till, I could see at once that we were ruined. Mr. Dance could make nothing of the scene.

“They got the money, you say? Well, then, Hawkins, what in fortune were they after? More money, I suppose?”

“No, sir; not money, I think,” replied I. “In fact, sir, I believe I have the thing in my breast pocket; and to tell you the truth, I should like to get it put in safety.”

“Perfectly right,” he interrupted very cheerily, “perfectly right—a gentleman and a magistrate. And, now I come to think of it, I might as well ride round there myself and report to him or squire. Master Pew’s dead, when all’s done; not that I regret it, but he’s dead, you see, and people will make it out against an officer of his Majesty’s revenue, if make it out they can. Now, I’ll tell you, Hawkins, if you like, I’ll take you along.”

I thanked him heartily for the offer, and we walked back to the hamlet where the horses were. By the time I had told mother of my purpose they were all in the saddle.

“Dogger,” said Mr. Dance, “you have a good horse; take up this lad behind you.”

As soon as I was mounted, holding on to Dogger’s belt, the supervisor gave the word, and the party struck out at a bouncing trot on the road to Dr. Livesey’s house.