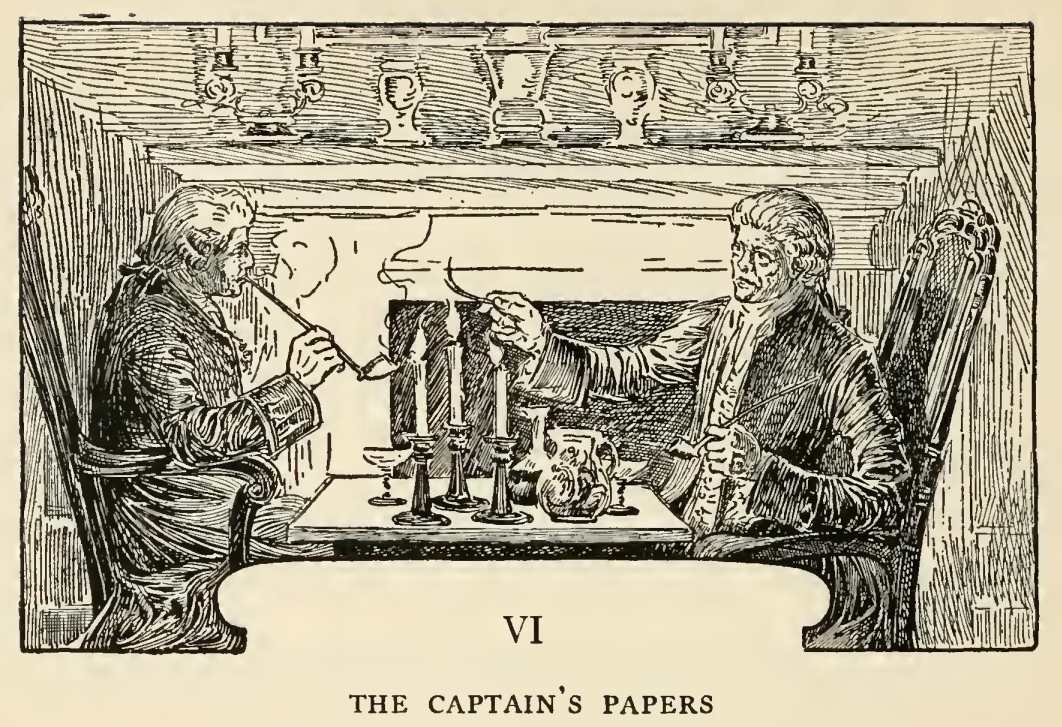 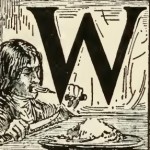 WE rode hard all the way till we drew up before Dr. Livesey’s door. The house was all dark to the front.

Mr. Dance told me to jump down and knock, and Dogger gave me a stirrup to descend by. The door was opened almost at once by the maid.

No, she said, he had come home in the afternoon but had gone up to the hall to dine and pass the evening with the squire.

This time, as the distance was short, I did not mount, but ran with Dogger’s stirrup-leather to the lodge gates and up the long, leafless, moonlit avenue to where the white line of the hall buildings looked on either hand on great old gardens. Here Mr. Dance dismounted, and taking me along with him, was admitted at a word into the house.

The servant led us down a matted passage and showed us at the end into a great library, all lined with bookcases and busts upon the top of them, where the squire and Dr. Livesey sat, pipe in hand, on either side of a bright fire.

I had never seen the squire so near at hand. He was a tall man, over six feet high, and broad in proportion, and he had a bluff, rough-and-ready face, all roughened and reddened and lined in his long travels. His eyebrows were very black, and moved readily, and this gave him a look of some temper, not bad, you would say, but quick and high.

“Come in, Mr. Dance,” says he, very stately and condescending.

“Good evening, Dance,” says the doctor with a nod. “And good evening to you, friend Jim. What good wind brings you here?”

The supervisor stood up straight and stiff and told his story like a lesson; and you should have seen how the two gentlemen leaned forward and looked at each other, and forgot to smoke in their surprise and interest. When they heard how my mother went back to the inn, Dr. Livesey fairly slapped his thigh, and the squire cried “Bravo!” and broke his long pipe against the grate. Long before it was done, Mr. Trelawney (that, you will remember, was the squire’s name) had got up from his seat and was striding about the room, and the doctor, as if to hear the better, had taken off his powdered wig and sat there looking very strange indeed with his own close-cropped black poll.

“Mr. Dance,” said the squire, “you are a very noble fellow. And as for riding down that black, atrocious miscreant, I regard it as an act of virtue, sir, like stamping on a cockroach. This lad Hawkins is a trump, I perceive. Hawkins, will you ring that bell? Mr. Dance must have some ale.”

“And so, Jim,” said the doctor, “you have the thing that they were after, have you?”

“Here it is, sir,” said I, and gave him the oilskin packet.

The doctor looked it all over, as if his fingers were itching to open it; but instead of doing that, he put it quietly in the pocket of his coat.

“Squire,” said he, “when Dance has had his ale he must, of course, be off on his Majesty’s service; but I mean to keep Jim Hawkins here to sleep at my house, and with your permission, I propose we should have up the cold pie and let him sup.”

“As you will, Livesey,” said the squire; “Hawkins has earned better than cold pie.”

So a big pigeon pie was brought in and put on a sidetable, and I made a hearty supper, for I was as hungry as a hawk, while Mr. Dance was further complimented and at last dismissed.

“And now, squire,” said the doctor.

“And now, Livesey,” said the squire in the same breath.

“One at a time, one at a time,” laughed Dr. Livesey. “You have heard of this Flint, I suppose?”

“Heard of him!” cried the squire. “Heard of him, you say! He was the bloodthirstiest buccaneer that sailed. Blackbeard was a child to Flint. The Spaniards were so prodigiously afraid of him that, I tell you, sir, I was sometimes proud he was an Englishman. I’ve seen his top-sails with these eyes, off Trinidad, and the cowardly son of a rum-puncheon that I sailed with put back—put back, sir, into Port of Spain.”

“Well, I’ve heard of him myself, in England,” said the doctor. “But the point is, had he money?”

“Money!” cried the squire. “Have you heard the story? What were these villains after but money? What do they care for but money? For what would they risk their rascal carcasses but money?”

“That we shall soon know,” replied the doctor. “But you are so confoundedly hot-headed and exclamatory that I cannot get a word in. What I want to know is this: Supposing that I have here in my pocket some clue to where Flint buried his treasure, will that treasure amount to much?”

“Amount, sir!” cried the squire. “It will amount to this: If we have the clue you talk about, I fit out a ship in Bristol dock, and take you and Hawkins here along, and I’ll have that treasure if I search a year.”

“Very well,” said the doctor. “Now, then, if Jim is agreeable, we’ll open the packet”; and he laid it before him on the table.

The bundle was sewn together, and the doctor had to get out his instrument case and cut the stitches with his medical scissors. It contained two things—a book and a sealed paper.

“First of all we’ll try the book,” observed the doctor.

The squire and I were both peering over his shoulder as he opened it, for Dr. Livesey had kindly motioned me to come round from the side-table, where I had been eating, to enjoy the sport of the search. On the first page there were only some scraps of writing, such as a man with a pen in his hand might make for idleness or practice. One was the same as the tattoo mark, “Billy Bones his fancy”; then there was “Mr. W. Bones, mate,” “No more rum,” “Off Palm Key he got itt,” and some other snatches, mostly single words and unintelligible. I could not help wondering who it was that had “got itt,” and what “itt” was that he got. A knife in his back as like as not.

“Not much instruction there,” said Dr. Livesey as he passed on.

The next ten or twelve pages were filled with a curious series of entries. There was a date at one end of the line and at the other a sum of money, as in common account-books, but instead of explanatory writing, only a varying number of crosses between the two. On the 12th of June, 1745, for instance, a sum of seventy pounds had plainly become due to someone, and there was nothing but six crosses to explain the cause. In a few cases, to be sure, the name of a place would be added, as “Offe Caraccas,” or a mere entry of latitude and longitude, as “62o 17′ 20″, 19o 2′ 40″.”

The record lasted over nearly twenty years, the amount of the separate entries growing larger as time went on, and at the end a grand total had been made out after five or six wrong additions, and these words appended, “Bones, his pile.”

“I can’t make head or tail of this,” said Dr. Livesey.

“The thing is as clear as noonday,” cried the squire. “This is the black-hearted hound’s account-book. These crosses stand for the names of ships or towns that they sank or plundered. The sums are the scoundrel’s share, and where he feared an ambiguity, you see he added something clearer. ‘Offe Caraccas,’ now; you see, here was some unhappy vessel boarded off that coast. God help the poor souls that manned her—coral long ago.”

“Right!” said the doctor. “See what it is to be a traveller. Right! And the amounts increase, you see, as he rose in rank.”

There was little else in the volume but a few bearings of places noted in the blank leaves towards the end and a table for reducing French, English, and Spanish moneys to a common value.

“Thrifty man!” cried the doctor. “He wasn’t the one to be cheated.” 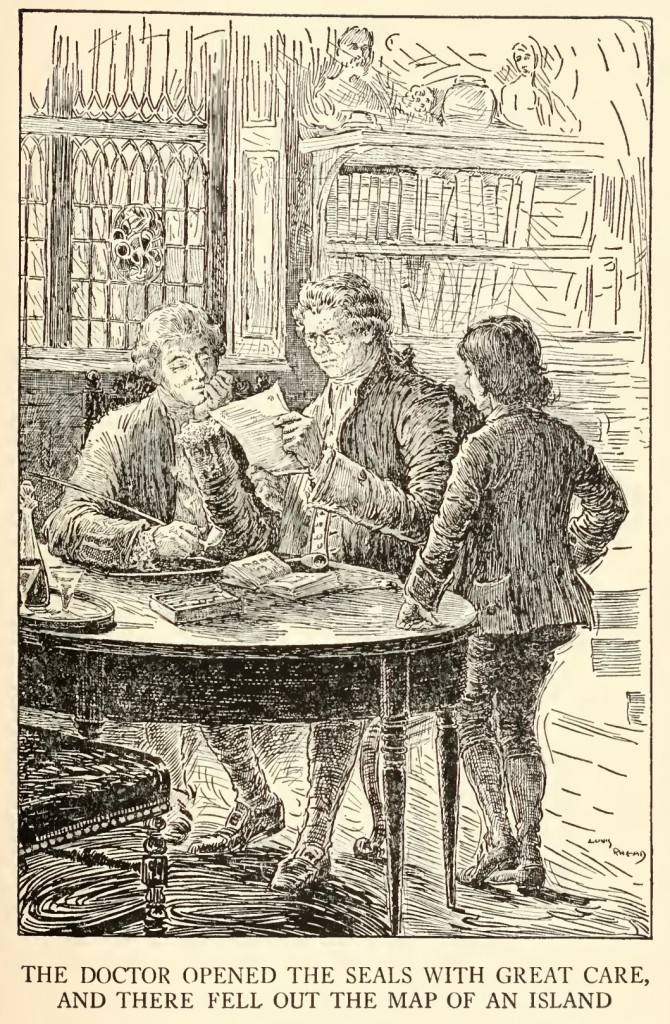 The paper had been sealed in several places with a thimble by way of seal; the very thimble, perhaps, that I had found in the captain’s pocket. The doctor opened the seals with great care, and there fell out the map of an island, with latitude and longitude, soundings, names of hills and bays and inlets, and every particular that would be needed to bring a ship to a safe anchorage upon its shores. It was about nine miles long and five across, shaped, you might say, like a fat dragon standing up, and had two fine land-locked harbours, and a hill in the centre part marked “The Spy-glass.” There were several additions of a later date, but above all, three crosses of red ink—two on the north part of the island, one in the southwest—and beside this last, in the same red ink, and in a small, neat hand, very different from the captain’s tottery characters, these words: “Bulk of treasure here.”

Over on the back the same hand had written this further information:

Tall tree, Spy-glass shoulder, bearing a point to the N. of N.N.E.
Skeleton Island E.S.E. and by E.
Ten feet.
The bar silver is in the north cache; you can find it by the trend of the east hummock, ten fathoms south of the black crag with the face on it.
The arms are easy found, in the sand-hill, N. point of north inlet cape, bearing E. and a quarter N.
J.F.

That was all; but brief as it was, and to me incomprehensible, it filled the squire and Dr. Livesey with delight.

“Livesey,” said the squire, “you will give up this wretched practice at once. Tomorrow I start for Bristol. In three weeks’ time—three weeks!—two weeks—ten days—we’ll have the best ship, sir, and the choicest crew in England. Hawkins shall come as cabin-boy. You’ll make a famous cabin-boy, Hawkins. You, Livesey, are ship’s doctor; I am admiral. We’ll take Redruth, Joyce, and Hunter. We’ll have favourable winds, a quick passage, and not the least difficulty in finding the spot, and money to eat, to roll in, to play duck and drake with ever after.”

“Trelawney,” said the doctor, “I’ll go with you; and I’ll go bail for it, so will Jim, and be a credit to the undertaking. There’s only one man I’m afraid of.”

“You,” replied the doctor; “for you cannot hold your tongue. We are not the only men who know of this paper. These fellows who attacked the inn tonight—bold, desperate blades, for sure—and the rest who stayed aboard that lugger, and more, I dare say, not far off, are, one and all, through thick and thin, bound that they’ll get that money. We must none of us go alone till we get to sea. Jim and I shall stick together in the meanwhile; you’ll take Joyce and Hunter when you ride to Bristol, and from first to last, not one of us must breathe a word of what we’ve found.”

“Livesey,” returned the squire, “you are always in the right of it. I’ll be as silent as the grave.”